Johannesburg gets a bum rap. South Africa's biggest city is a vibrant spot that many visitors avoid because of its "crime" problem.

The reality is that much of the crime in Johannesburg happens in townships and informal settlements that are a long way from anywhere a tourist would find themselves.

Major investments in tourism mean Soweto is now safe as houses and I'd rather wander downtown Johannesburg (check out the cool Maboneng precinct) than San Francisco's Tenderloin or Detroit's Eight Mile. 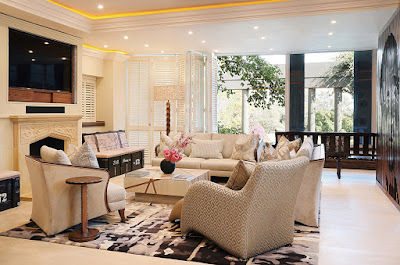 The team at The Saxon Hotel, Villas and Spa (above), a leafy luxury retreat in the northern suburbs and one of my favourite places to stay in Johannesburg, point out there is more to Egoli than meets the eye. It is a cultural hot spot with strong historical links.

The hotel itself is where Nelson Mandela stayed while writing a book, while the head chef is Australian Jane-Therese Mulry (ex qualia and Cradle Mountain Lodge).

Among the highlights are the re-emerging inner city and the dynamic and thriving townships of Soweto (below), a cultural melting pot that is home to millions.

Visitors can trace the footsteps of two of South Africa’s most treasured legacy-makers, with a visit to the Nelson Mandela Museum, the Soweto home of Nelson Mandela, as well as the former home of Desmond Tutu in Vilakazi Street, Orlando West.

Throw in a visit to the compelling but disturbing Apartheid Museum to realise the horrors of recent history. 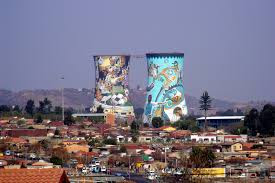 Johannesburg, known to locals as Jozi, offers a diverse array of art galleries, exhibiting a varied mix of artistry, from the work of international artists to local South African talent. Visitors can experience a tailor-made tour to several galleries and showrooms.

The City of Gold has several experiences just a short drive from the metropolis. Here are five suggested by the concierge team at The Saxon.

A World Heritage Site stretching over 180 square miles, the Cradle of Humankind is dotted with limestone caves in which some of the oldest hominin fossils ever found – dating back as far as 3.5 million years ago – have been discovered over the last 100 years. The Sterkfontein Caves are the best-known, but the Wonder Cave is another notable experience. Descend into this single-chamber cave via steep steps and a lift shaft, before emerging into a cavernous space boasting magnificent stalagmites and stalactites. This experience lies a 90-minute drive away from the Saxon.

Enjoy a cultured and peaceful day trip where art and nature meet in perfect harmony at the Nirox Sculpture Park. Part of the larger Nirox Foundation, the park hosts public sculpture exhibitions and music concerts, while private appointments can also be booked to explore the permanent artworks that lie within the reserve.

Horse-Riding in the Magaliesberg Mountains

A hundred times older than Everest and the fourth oldest range in the world, these beautiful mountains (below) north-west of Johannesburg. A scenic horse ride is one of the best ways to explore some of the trails and marvel at the prehistoric landscapes.

This nature reserve is just a 90-minute drive from the Saxon and is home to the well-known Wonderboom. The ‘wonder tree’ (in Afrikaans) is a dense grove of evergreen fig trees, originating from a trunk believed to be 1,000 years old. Over time the branches of this original tree have grown longer and lower, ultimately rooting themselves around the ancient trunk. Three layers of ‘daughter’ trees now encircle the parent fig tree, creating a natural spectacle covering a 50-metre area, which is now laced with walkways for visitors to explore.

Float over the picturesque countryside of the Cradle of Humankind and Magaliesberg, or go slightly further afield to Pilanesberg National Park, which is set in an extinct volcanic crater. The sights of the South African countryside are truly spectacular seen from above, as you glide peacefully over the world.

The Saxon can organise day trips and tours throughout a stay - and organised adventures are probably best for first-time visitors as Africa can be something of a culture shock.