Is this the most disgusting drink on the planet?


It is a right of passage for many visitors to the 1890s-style Sourdough Saloon at the Downtown Hotel in Dawson City. Drinking a "sour-toe" cocktail.

I was older and wiser when I hit the former gold rush city a few years back but the young and foolish still test themselves. 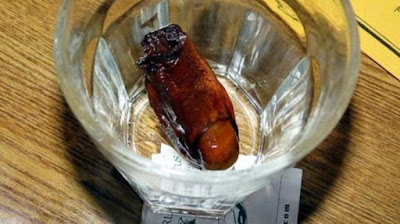 The sour-toe is a severed toe, long dead, dry and black. It is dropped into a drink of tequila or Yukon Jack liquor and some innocent, or idiot, drinks it. The rules state your lips must touch the toe, or your attempt is invalid.

I noticed a lot more tourists than locals joining the sour-toe club. Funny that.

The legend of the first “sour-toe” dates back to the 1920s and features a legendary rum-runner named Louie Linken and his brother Otto. During one of their cross-border deliveries, they ran into a blizzard.

In an effort to help direct his dog team, Louie stepped off the sled and into some icy overflow - soaking his foot thoroughly.

Fearing that the police were on their trail, they continued on their journey. Unfortunately, the prolonged exposure to the cold caused Louie’s big toe to be frozen solid.

To prevent gangrene, Otto performed an amputation using a woodcutting axe (and some overproof rum for anesthesia). To commemorate this moment, the brothers preserved the toe in a jar of alcohol.

Years later, while cleaning out an abandoned cabin, the toe was discovered by riverboat skipper Captain Dick Stevenson. After conferring with friends, the Sourtoe Cocktail Club was established and rules developed.

Since its inception, the club has acquired (by donation) over 10 toes.

The former gold-rush city, a Wild West legend at the junction of the Yukon and Klondike rivers, lies under snow for much of the year, deserted by all but the hardiest of its residents.

Most hotels and restaurants close down; locals travel by Skidoo, dog sled or on skis and tourism is virtually non-existent.

Then the sun starts to shine and each year, like a chrysalis emerging as a butterfly, this tough-but-fascinating town is reborn and visitors are once again invited to take a step back in time to enjoy panning for gold, sleeping in a former brothel or exploring the remains of once-majestic Yukon River paddle-steamers in a slightly spooky ship's graveyard.

The west doesn't get much wilder, despite the friendly vibe. There's only one paved road, the Top of the World Highway, in and out of town. Next stop, Alaska. As the locals like to joke: "This isn't the end of the world but you can see it from here."

Dawson City has enjoyed booms and busts. In the late 1890s, gold was discovered and it was known as "the Paris of the north", becoming the second city in North America to get electricity after Chicago.

In 1898, it had a population of more than 45,000 and was the largest city north of Seattle and west of Winnipeg. There was so much money in town that locals used to send to London and Paris for Champagne and silk shirts and men and women from around the globe descended to "mine the miners".

Four years later, the gold rush was over, though locals say "there are still nuggets out there" and hopefuls from around the world hit the rivers hoping to strike it lucky.

Some craggy, wild-looking characters inhabit these parts and you'll probably find them at Diamond Tooth Gerties Gambling Hall, a Wild West-style casino and the centre of the bawdy night-time action.

Fly to Whitehorse with Air Canada and then take an internal flight to Dawson’s tiny airport with Air North.