Bissell retires from Balnaves after 25 years in charge

Pete Bissell, all-round good guy and senior winemaker at Balnaves of Coonawarra for a quarter of a century, has announced his retirement. 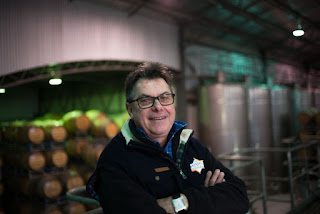 Bissell has been a winemaker for 40 years and will not be leaving the industry all together. He will remain in Penola and work on his own vineyard, as well as becoming a grandfather.

Jacinta Jenkins, who has been working under Bissell, will take over as chief winemaker from July 1.

Originally from New Zealand, Bissell completed his studies at Roseworthy College in the late 80s.

While studying he gained experience working in France, and at Australian wineries including Mountadam, Lindemans Hunter River, Leo Buring, and Pipers Brook in Tasmania.

He has also worked for Wynns Coonawarra Estate and Penfolds.

“I am very grateful to the Balnaves family for the opportunity to initially design and build the winery back in 1996 but also for the 25 years I have spent here," Bissell said.

"I spent the majority of my career working in Coonawarra and was given the freedom to do experiments, evolve the styles and go in a unique direction.”

The Balnaves family and Bissell have had a dream run of awards since, with the Jimmy Watson trophy for Punters Corner in 1999 (when the vineyard was run and wine made by Balnaves), Qantas/Gourmet Traveller Winemaker of the Year in 2005, Jeremy Oliver Wine of the Year in 2007, James Halliday’s Winery of the Year in 2008 and a Langtons Classification of Outstanding for The Tally three times.

Balnaves has been a 5-star-rated winery by James Halliday for 18 consecutive years.