I've flown many times with Red Airlines, as well as writing for its in-flight magazine. 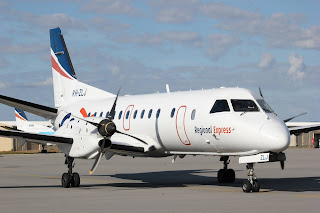 Rex has tended to fly to regional destinations like Mount Gambier, MIldura, Burnie and Griffith - but all that is about to change.
The Rex board has formed the view that Rex could successfully embark on domestic operations between major centres including Melbourne, Sydney and Brisbane.
Due to the strong interest shown by various external parties to participate in a fund raising - including lessors willing to provide $30 million for 15 of Rex's fleet of 60 unencumbered Saab 340 aircraft, the board has formed the view that funding will be forthcoming for the minimum target sought.
Consequently the board has authorised management to commence preparations in earnest for the operation of an initial fleet of five to 10 narrow-body jet aircraft to be based out of Sydney and/or Melbourne to service the golden triangle (Sydney-Melbourne-Brisbane).
The board has confirmed March 1, 2021, as the targeted start date for the start of those operations.
Rex's deputy chairman, John Sharp, said: “Rex has the biggest regional network in Australia and we are the only carrier in Australia that has been able to successfully navigate the turmoil and shocks over the last two decades with uninterrupted operational profits since 2003.
“With Rex's expansive regional network of 60 destinations, existing infrastructure in all these capital city airports, superior efficiencies and unbeatable reliability, it will simply be an incremental extension for Rex to embark on domestic operations especially since one out of every 10 flights in Australia was already a Rex flight during the pre-Covid days.
"Leveraging on Rex's existing infrastructure and overheads, our cost base for the domestic operation is estimated to be at least 35% below Virgin's Australia's (pre-Covod) with 50% lower additional headcount needed proportionately.
“Rex's domestic operations will be priced at affordable levels but will also include baggage allowance, meals on board and pre-assigned seating."
Regional Express (Rex) is Australia's largest independent regional airline operating a fleet of 60 Saab 340 aircraft (pre-Covid) on some 1,500 weekly flights to 60 destinations throughout all states in Australia.
See www.rex.com.au/