England is full of country walks that allow ramblers to freely traverse farms, moors and woods. But these idyllic country locations are also home to potentially lethal animals.

Cows, in particular, regularly attack - and sometimes kill - walkers all over England's green and pleasant land. 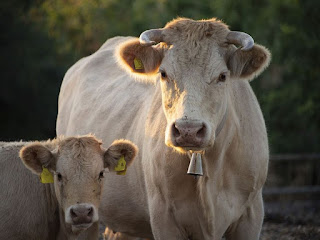 The latest victim was an 82-year-old man who died at the weekend after he was attacked by a herd of cows while walking in the Yorkshire dales.

Although emergency services were called, he was pronounced dead at the scene. His wife was badly bruised.

Cows are often found on public footpaths, or areas on which walkers have right of way.

The Health and Safety Executive (HSE) has identified cows as the most dangerous animals in the United Kingdom due to the number of accidents they are involved in every year. Many fatal accidents involve farm workers, with dog walkers also prone to attacks.

And when cows see plastic bags they think they contain feed and are liable to charge anyone carrying one.

Figures recorded by the HSE show that of the 18 members of the public who died between 2000 and 2015 following an incident involving cattle, 17 were accompanied by a dog.

There is even a website devoted to dealing with ultra-aggressive bovines: https://killercows.co.uk/
Posted by Winsor Dobbin at 17:41