The 19 Crimes brand has been Australia’s leading wine growth brand over the past 12 months.

It has been so successful that it has now spawned a younger brother - a 19 Crimes beer. 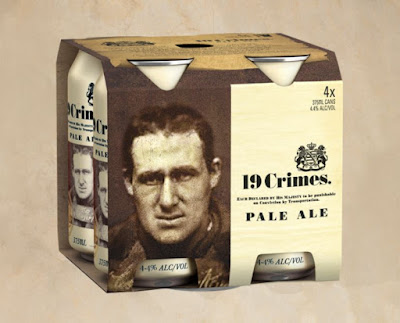 Currently a limited edition, targeted at millennial craft beer drinkers who are on the lookout for something new, the 19 Crimes Pale Ale features similar packaging, complete with the brand's "mug shot" experience.

Named after 18th and 19th-century British rogues sentenced to live in Australia as punishment because they were found guilty of at least one of 19 Crimes, the brand celebrates the rules they broke.

The 19 Crimes Pale Ale will be on sale through Cellarbrations, The Bottle-O, IGA Liquor and Ritchies liquor outlets, along with select on-premise and independent retailers.

“Creating a Pale Ale felt like a natural, obvious next step for the brand as we know that our wine consumers equally enjoy discovering craft beer," said brand manager Laura Wenn.

“We are confident that the 19 Crimes Pale Ale will prove successful with millennials thanks to its crisp taste, distinctive packaging and our ‘talking’ augmented reality label.”

19 Crimes was launched in Canada in 2011, was launched in the USA in 2012, followed by Australia in 2014. Sales exceed 1.6 million cases annually. The beer launch follows successful beer releases in other markets.
Posted by Winsor Dobbin at 17:55