Keep away from our tourist attractions!

Residents in some of Britain's most beautiful tourism regions have urged would-be visitors to stay away.

There are also concerns that second-home owners are choosing to self-isolate at their countryside properties.

The outcry led Health Secretary Matt Hancock to say people should not go to holiday and caravan parks to self-isolate, amid warnings that local services would be put under extra pressure, Travel Mole reported. 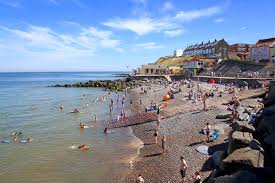 Penny Jones, of Crabpot Cottages in Sheringham (above), in Norfolk, told the Eastern Daily Press that strangers had not been heeding the Government’s advice on social distancing.

“The coastal towns were absolutely packed, like a summer bank holiday." she said. “Normally this would have filled my heart with joy, but not today. We live near Hunstanton - and that was just packed.

“The coast road was bumper to bumper. I don’t believe it was holiday makers but locals out for Mothers’ Day.”

In Skegness, Lincolnshire, dentist Dr Mitchell Clark warned of a "disaster waiting to happen" as thousands flocked to the resort at the weekend.

He described Skegness as "looking like it does on a busy summer day".

"I view these actions as massively, massively socially irresponsible. I personally think that those involved should be ashamed of themselves."

West Wittering beach in Sussex has shut, while police in Cumbria warned tourists not to travel to the Lake District. Cornwall has also told visitors to stay away until the coronavirus crisis is over.

Visit Cornwall said: "Visitors should not come to Cornwall at this time, in order to slow the spread of the virus, to protect themselves, as well as the communities of Cornwall."
Posted by Winsor Dobbin at 19:34