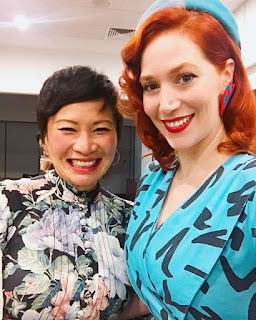 MasterChef Australia fan favourite Sarah Clare was bravely hiding a secret during the broadcast last weekend of the program's final "Back To Win" episode.

Clare (above with Poh Ling Yeow) made a final fashion statement with her 60s styling but had kept secret the fact she has had to close her Tasmanian restaurant - Ilha - permanently.

The double whammy of being on MasterChef duty and the Covid-19 pandemic proved too big a hurdle to overcome.


Clare had decided several weeks ago that Ilha would not reopen in the her hometown of Cygnet - but only made an official announcement this week.

"Ilha restaurant Cygnet would like to thank all of the amazing people who have supported us in our endeavour and so it is with a heavy heart that we have had to shut our doors," she said on Facebook.

"When one door closes, however, another opens and we have some exciting dinners in our future!"

It is understood some pop-up feasts are on the agenda.

Clare appeared in season 10 and season 12 of the popular cooking show and sourced much of her wardrobe from the Dusty Mermaid retro shop in Geeveston.

The news is not all bad for the hamlet of Cygnet, however, with The Conservatory at The Old Bank now open seven days, the Red Velvet Lounge open six days a week and doing dinners Friday and Saturday nights and Port Hole Cafe having replaced ill-fated Tangelo.