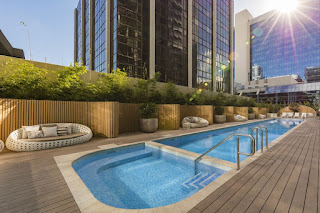 Parramatta,which has ambitions to be recognised as Sydney's second CBD, this week gets its first five-star hotel.

Each features L’Occitane toiletries, in-room dining from a modern on-site restaurant, a pre-stockable maxi-bar, the ability to choose your mattress firmness on each side of the bed, keyless entry and ‘virtual concierge’ tablets to enable access to all hotel services from each suite.
Amenities include a state-of-the-art gymnasium, pool, sundeck, spa, sauna and new restaurant, Husk & Vine Kitchen and Bar, which opened at lobby level on July 1.
Later this year cocktail operative Sven Almenning (the press release calls him a cocktail legend) will open a 26th-floor rooftop bar.

When breaking ground for the development, Crown Group discovered archaeological remains integral to Parramatta’s historical and cultural past, including an 1840s house, an underlying convict hut, wheelwright’s workshop and the cellar of the Wheat Sheaf Hotel, which were preserved for public display and have inspired Husk & Vine’s decor.

The building itself is an architectural centrepiece for Parramatta, located less than 300 metres from Parramatta Square and a short walk from Parramatta’s train station and ferry wharf.

Future SKYE Hotels Suites openings include Sydney CBD in 2018 and Green Square in 2019.