Meet the new restaurant and bar with a 100% Victorian focus

Shadowplay by Peppers Hotel at Southbank Melbourne has revealed a menu and drinks list that is 100% Victorian.

Edwin Wine Bar & Cellar’s wine list features wine from each of Victoria’s 21 wine regions, including some of Australia’s most well-known and sought after wine labels such as Crawford River, Bindi, Yarra Yering and Sorrenberg. 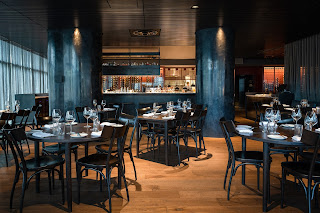 “Our menu is not just curated from the inspiration of Victoria’s best wine and produce, its philosophy is based on gender equity and fostering a relationship with local producers.”

Resident sommelier Yu Kurosawa is one of the growing number of female sommeliers in Australia and says that every wine has a story, not just about how it tastes and what food it should be paired with, but how and where the grapes were grown and the individual style of the winemaker.

“We hang our hat on the fact our wine list has been curated to be filled with Victorian wines, including some of Australia’s most well-known and sought-after wine labels.

“In fact, our entire drinks menu is locally sourced including water and soft drinks from Daylesford, orange juice from Caulfield and soda and mixers from Kyneton.”

The venue is also encouraging guests to discover the stories behind its wine list with its monthly wine program, created by sommelier and wine educator Dan Sims.

Each month will focus on a different Victorian wine region (e.g. July – Macedon, August - Heathcote/Bendigo, September – Yarra Valley) and an evening event will be presented by the winemakers themselves. The evening tastings will be free. 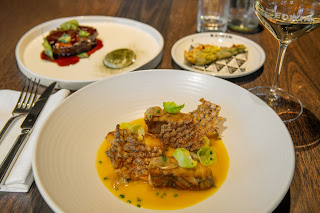 Head chef Ritesh Patil says it was not difficult to create a menu that exclusively featured produce from Victoria.

“Not only does Victoria produce the best seafood, meats, cheeses and local produce in Australia but we have some great local producers here who deserve to step out of the shadows of being just a supplier and be seen as co-creators of our menu of excellence,” he said.

The menu highlights a Daylesford salumi selection and celebrates cheese supplied by Marie at Emerald Deli at South Melbourne markets.

Chef Patil’s food preparation style is one of simplicity with just four or five ingredients on a plate.

“It is much more powerful to have each ingredient speak for itself," he said. "I don’t over-complicate my dishes because this just drowns each ingredient’s contribution to a dish.”

I dined last night and found chef Patil has a deft hand. He lets hero ingredients speak for themselves and finds a keen balance between flavours and textures.

Edwin Wine Bar and Cellar is located at 308-320 City Road, Southbank, and is open daily for breakfast, lunch and dinner.

For more information and to peruse menus, visit www.peppers.com.au/shadow-play/dining