For fireworks head to Macao

Macao is set to celebrate its 20th anniversary as a Special Administrative Region of the People's Republic of China with a bang.
For the first time in the three-decade history of the annual Macao International Fireworks Display Contest, the competition will involve 12 nations, two more than in previous challenges. 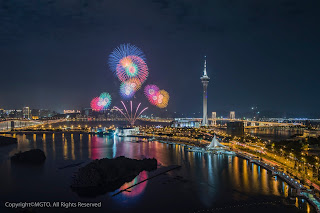 The contest, to be held over six nights from September 7 until October 5, 2019, will be the most comprehensive and spectacular series of fireworks displays staged in the former Portuguese enclave.
The best vantage points will be along the waterfront near the iconic 338-metre high Macau Tower.
On top of this extravaganza, a special 20th anniversary fireworks night has been scheduled for December 20, the date of the handover in 1999, followed by the traditional New Year fireworks on December 31.
“Anyone who plans to visit Macao before the end of the year can expect some special moments during the year-long 20th anniversary celebrations,” said Helen Wong, general manager of the Macao Government Tourism Office (Australia and New Zealand).
“In addition to the various fireworks, Macao will host a series of major festivals, some that will have you dancing in the streets,” she said.
“Among those is the colourful International Parade along with the inaugural five-month long Art Macao festival which was launched in June and finishes on October 31.
“In line with Macao's designation as a UNESCO Creative City of Gastronomy, the mouth-watering Macanese cuisine will be highlighted at the many festivals.”
For dates and details phone (02) 9264 1488 or check out www.visitmacao.com.au
Posted by Winsor Dobbin at 13:23