The much-anticipated Sofitel Sydney Darling Harbour opened its doors this week, making it the first new-build, international luxury hotel to open in Sydney's CBD in more than 15 years.

Centrally located opposite the International Convention Centre, the $500 million hotel is aimed at reviving the Darling Harbour precinct. 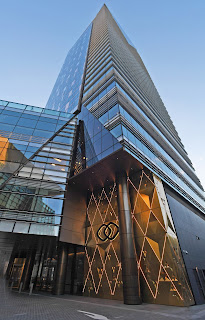 It also signals a renaissance of new hotel development in Sydney, with over 40 hotels scheduled to open in the next five years to support the city's remarkable tourism growth.
“It is incredibly exciting to be opening Sofitel Sydney Darling Harbour, which is Sydney's first new-build internationally branded luxury hotel since the 2000 Olympics,” said Simon McGrath, chief operating officer of AccorHotels Pacific.
To celebrate, Sofitel Sydney Darling Harbour is offering an opening package which includes overnight accommodation in a superior Darling Harbour view room, buffet breakfast for two at Atelier by Sofitel restaurant, a Champagne degustation served at the Champagne Bar for two people, a selection of Ladurée sweets and late checkout of 3pm.

The Grand Opening Package is priced from $529, which seems like terrific value given some Sydney hotel prices, and bookings can be made at www.sofitelsydneydarlingharbour.com.au
The hotel offers 590 guest rooms including 35 suites that boast some of the best views in Sydney.

All the hotel's rooms feature the Sofitel MyBed™ and have floor-to-ceiling windows with views of Darling Harbour and the city. The suites feature an in-bathroom television, double shower heads and luxurious soaking tubs for the ultimate pampering experience.
Exclusive to guests staying in the Club Sofitel rooms and suites on levels 28-24, the Club Millesime Lounge, located at the very top of the hotel on level 35 has superb views over Darling Harbour and the city. 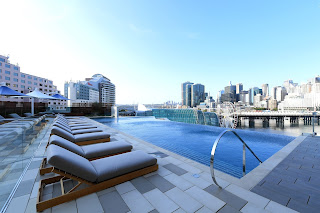 The hotel was designed by renowned multi award-winning Sydney architect Richard Francis-Jones from Francis-Jones Morehen Thorp architects. Dreamtime Australia Design and the A+ Design Group all collaborated to create this visually inspiring property which was built by Lend Lease.

On arrival, guests will be greeted by the hotel's imposing 35-storey glass exterior featuring triangular accents representing sails and a striking red ochre and blue exterior colour palette which pays tribute to the indigenous clans of the Eora nation who lived around Tumbalong – the Koori name for Darling Harbour.
The hotel boasts three bars and a signature eatery; the French-inspired rotisserie and grill Atelier by Sofitel on the third floor. 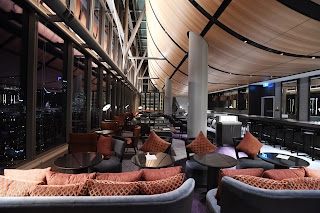 The Champagne Bar is billed as the largest Champagne bar in Sydney, highlighting 20 different styles including Canard-Duchene, Pol Roger, Louis Roederer and Pommery. There also will be a special Louis Roederer Champagne from the 2009 vintage in collaboration with artist Philippe Starck, representing the mix of innovation and French heritage.

Sofitel Sydney Darling Harbour will also be the only hotel in Australia to acquire a special edition 3-litre Jeroboam of Roederer Brut Cristal valued at $22,000. The bottle is encased in 24-carat gold-dipped latticework handcrafted by two master goldsmiths over four days. I suspect it won't be long before one of Sydney's conspicuous consumers makes a statement by cracking it open. Let's hope it isn't corked.

Drinks are also served at Esprit Noir lobby bar and Le Rivage Pool Bar on the fourth floor. I'll be aiming to try them on my next visit to the big smoke as my launch invitation apparently got lost en route.