Discover Madeira: a destination and a drink

The Portuguese island of Madeira will reopen to tourists on July 1 and will provide a free coronavirus test on arrival.Alternatively, visitors have the option of presenting the results of a negative test taken no more than 72 hours before departure.

Having registered just 90 cases of coronavirus, the Portuguese islands are positioning themselves as a Covid-19-safe destination.I've been lucky enough to visit Madeira twice - and the British have been in on the charm of the destination since the late 17th century.

Much more than just an island in the sun, Madeira is politically Portuguese but geographically African, lying some 550km off the north African coast.

It is south of Casablanca and is also probably the only holiday island in the world without a single sandy beach.
Madeira's beaches are, to put it bluntly, small, pebbled and disappointing particularly to Australians used to expanses of golden sand.
Fortunately, the island has a lot more to offer, including its year-round mild climate and slow pace.
It may be just 58km long and 23km wide, but Madeira has been described as a floating garden.
Its rich, volcanic soil and sub-tropical climate produce wildly colourful displays of flowers all year round and sprawling plantations of bananas and grapes, many of which are used to make the famous local fortified wines.
The entire island is a walker's heaven, from a plethora of beautiful gardens to the cobblestones and cafes of the Old Town in the capital, Funchal.
Inland, there are inaccessible valleys and waterfalls that tumble from cliffs over roads and pathways and the entire island is criss-crossed by levadas (irrigation channels) which can lead you from barren mountain tops to semi-tropical jungle in just a few hours.
I'd advise travellers to take a coach tour to get a taste of the real Madeira, rather than hiring a car. The roads are tiny and twisting and local road rules are less than rigorously enforced.
One must-do trip is the short journey to the delightful village of Monte, in the hills above Funchal, from where you can take a toboggan trip (guided by two sturdy locals in costume) over the cobbles and back down into town.
Funchal, founded in 1451, is a terrific town for taking leisurely strolls. There is always something to discover among the Gothic and Baroque buildings.


A tiny laneway may lead to a wine lodge (make time to visit at least one or two of the producers of the famous local fortified wine). Names to look out for include Henriques & Henriques, Justino's, Blandy's and Barbeito. 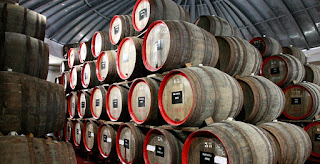 Madeira is produced in a variety of styles ranging from dry wines which can be consumed on their own as an aperitif to sweet wines usually consumed with dessert.  One of the grapes used is verdelho, which has subsequently found a happy home in the Hunter Valley.
Also check out workshops producing handmade boots and leather shoes and the island's famous embroidery.
Among its major attractions is the Marcado dos Lavaradores, a lively bustling market featuring local fruits and vegetables you will never have seen before, flower sellers dressed in traditional costume and, naturally, a huge and noisy fish market.
Also make sure to try the local alternative to a hamburger; a prego, a thin slice of steak inside a bun, served with salad and a hot piri-piri sauce. Cheap and delicious.
For more details visit http://www.visitmadeira.pt/en