Death toll mounts as Britain tries to catch up

Britain has now registered more deaths from coronavirus than any other country in Europe.

Since it confirmed its first case, Britain's response has proved one of the least effective for Covid-19 globally .

The official death toll so far from the epidemic has topped 33,000 and is still rising fast. The actual total could be much higher, analysts say. 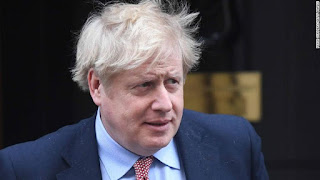 Now buffoon-like Prime Minister Boris Johnson (above), who has himself recovered from the virus, has confirmed the Government will bring in a 14-day quarantine rule for visitors into the UK.

In a televised statement on Sunday evening, Johnson said: "To prevent reinfection from abroad, I'm serving notice that it will soon be time, with transmissions [within the UK] significantly lower, to impose quarantine on people coming into into this country by air."

Johnson did not say why this obvious measure was not implemented much sooner. Quarantine rules have successfully been implemented in other countries, including Australia, New Zealand and Singapore.

Even now, progress is glacial. The PM did not give a date of when the new rules will come in, but news sources are saying perhaps at the end of the month.

The measures will apply to anyone arriving in the UK from any country except the Republic of Ireland and France.
At the moment British holidaymakers are free to fly in and out as they wish, as are visitors to Britain from overseas. Mind boggling.

Johnson did not make any more details available about how the quarantine would work, but Travel Mole reported it is believed the rules will mean people would have to provide an address when they arrive at the border.

Airport operators have said the move "'would not only have a devastating impact on the UK aviation industry, but also on the wider economy".