Sydney to get a landmark new mural 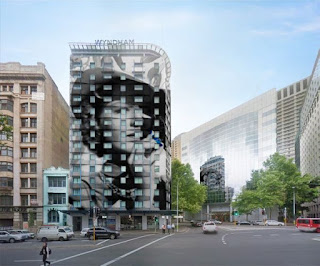 One of Australia's largest murals will soon adorn the façade of the Club Wyndham Sydney building, with a 14-storey artwork announced for the inner-city hotel, located on the corner of Goulburn and Wentworth streets.

"With Club Wyndham Sydney's prime corner block position in the heart of one of the world's greatest cities, at the gateway to the creative hub of Surry Hills, we saw an opportunity to do something unique during the property's upcoming renovation,” said Barry Robinson, President and Managing Director, International Operations, Wyndham Vacation Clubs.

Once complete, the mural will cover two sides and all 14 storeys of the hotel.


It will feature the faces of a man and woman from the 1940s, as a nod to the World War II news reels and movies from Hollywood that were first screened at the nearby Surry Hills Paramount Theatre before they were released into the Australian market. These films were Australia's connection to the outside world, and it was during this time that big Hollywood movie stars like Bob Hope and Charlton Heston visited the city.

Considered the birthplace of cinema in Australia, Surry Hills today remains a creative centre with the Belvoir Theatre and a concentration of film schools, production companies and art galleries in the area. In recognition of the film and arts communities of Surry Hills, the woman will be holding a vintage home movie camera. Pops of colour in the woman's nails and the man's eyes will enhance the sepia-toned retro design.

Artists from Apparition Media are expected to commence work on the mural in the coming weeks. The company of artists are skilled in a range of styles, from graffiti, to stencils, to highly detailed photorealism and are famous for creating striking murals across the country. Works are scheduled to be complete by mid-November.

“Club Wyndham celebrates living your bucket list today – the must-see destinations and the must-do experiences. Our resorts, located in iconic holiday destinations, offer quality apartment-style accommodation coupled with outstanding service. This is the ideal launch pad to experience the best of Sydney and we