Don't even try to grab some sleep at this airport 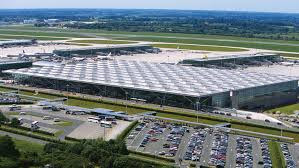 So you have a few hours to kill in an airport; maybe your flight is late, or you have a bad connection?

It makes sense to lie down and grab a sleep for an hour or two, doesn't it?

Not if you are at Stansted Airport (above) in Britain, where security guards are on patrol to implement a recent ban on passengers napping inside the terminal.

Warning signs have been posted around the terminal warning: "Please do not lie down on the seats."

The Essex airport brought in the ban earlier this month, claiming hundreds of passengers were camping out overnight - some of them on hammocks or blow-up beds.

The airport's departures wing is now closed after the final flight of the night. It remains shut from midnight until 2am, meaning anyone arriving at the budget flight airport during that time is directed to the arrivals area.

They can take a seat and rest there, but they are banned from having a nap on the floor, The Daily Mirror reported.

Passengers who book early morning flights have been told not to arrive sooner than their scheduled check-in time.

Stansted officials said the airport has seen up to 600 people camp out in the terminal overnight. Some travellers would rather sleep on the terminal floor instead of using local hotels.

"There are a number of reasons for the periodic overnight closures to the departures area of the terminal building: construction work as part of our £600 million airport transformation program, and to allow cleaning and other preparations for the next day's flight operations," the airport said in a statement.

"This means we've been reminding passengers there are no dedicated sleeping facilities in the terminal and advising they can no longer sleep on the floor overnight, so passengers should not arrive sooner than their scheduled check-in time."

Stansted Airport currently serves over 170 destinations across Europe, North Africa, Asia and Central and North America. It serves more scheduled European destinations than any other airport in the UK.