All change. New operator for one of Sydney's star tourism attractions

Sydney, the most visited city in Australia, is revamping one of its premier attractions after announcing a change in operator for the BridgeClimb on the Sydney Harbour Bridge. 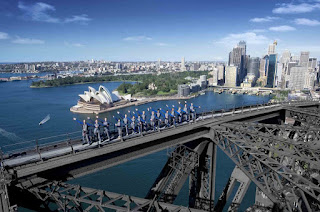 The New South Wales Government's Roads and Maritime Services (RMS) announced that BridgeClimb Sydney had been unsuccessful in its bid to win a new 20-year contract to operate on the Sydney Harbour Bridge.

The NSW Government body said that Hammons Holdings Pty Ltd, the operator of Scenic World in the Blue Mountains, had won the contract over current operator BridgeClimb Sydney.


Hammons Holdings director David Hammon said his company would expand opportunities for international, interstate and local visitors.
"We're really looking at ways to make new climbs on the bridge," he said.
The world famous experience was a world first, pioneered by BridgeClimb chairman and founder Paul Cave.
BridgeClimb has hosted four million climbers from over 140 countries since opening on October 1, 1998. BridgeClimb turned the Sydney Harbour Bridge from a postcard to a global bucket list experience.

The climb is renowned as a world-class experience and operation, and has an unblemished safety record, without one serious injury in 20 years. The decision to change operators is likely to come under serious scrutiny should that change.
Cave thanked all climbers and praised his team.

"It has been a privilege for us to make a hero of the bridge, and of every climber on every climb," he said.