Vintage looms as a disaster for South African wine industry

South Africa, where the wine industry has been booming, is facing a disastrous 2018 vintage due to a persistent drought that has been ravaging the Western Cape area for months. 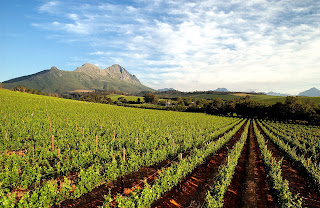 The Independent Online reports that yields for 2018 are expected to plunge by as much as 50% and the grape crop could be the smallest in over a decade.

“The 2018 wine grape crop is expected to be the smallest since 2005, due to a decline in vineyard area, an ongoing drought and crop losses due to frost and hail,” Francois Viljoen, manager of wine organisation Vinpro’s viticultural consultation service, told The Drinks Business.

Local dams in and around Stellenbosch (above), Paarl, Franschhoek and other wine regions are at around 25% capacity with drought conditions prevailing in the Western Cape for the third consecutive season.

Many producers depend on irrigation water from the various irrigation schemes that have been rationed since early in the 2017 growing season. Water quotas have been cut between 50-80%.

“Virtually no rain fell during this period and many hot days (above 35°C) were recorded," Viljoen said. "Together with a persistent south-easterly wind, this increased the water consumption of vineyards.”

Roland Peens, a director at local wine merchant, Wine Cellar, believes that the bulk wine industry would be affected the most, as it made up 90% of the industry in terms of volume produced.

The South African wine industry is the ninth largest producer of wine in the world and contributes 4% of global production. The country exports 440 million litres of wine annually and sells 400 million litres locally.