Look out for a new icon wine from Brown Brothers that pays tribute to second-generation family patriarch John Charles Brown.

The 2013 John Charles Brown Shiraz, Mondeuse and Cabernet is a single-vineyard wine from the family's original farm, planted at Milawa in north-east Victoria in 1885.

The new wine marks the innovation shown by John Charles Brown in 1954, when he decided to experiment with an unusual blend. Cabernet sauvignon and mondeuse grapes generally require more time on the vine than shiraz to obtain full ripeness. 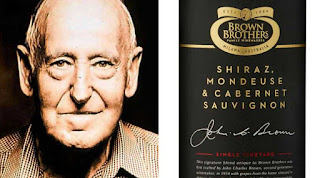 He decided to leave the shiraz on the vine longer so all three varieties were picked on the same day and co-fermented. The blend is still made in the same fashion today.

John Charles Brown was the only son of the Brown Brothers founder, John Francis Brown. He died 2004, aged 89, as his 70th vintage at Milawa drew to a close.

Having commenced in the business in 1934, John Charles held many positions from winemaker to manager to managing director to chairman and finally life president.

When he joined his father, the family had 35 acres under vines and supplemented their income with other farming activities. It was for winemaking that the company established its reputation, and the cereal crops and fat lambs gave way to grapevines.

John Charles initiated experiments in trialling uncommon varieties. These experiments continue today, with over 40 different varieties grown in the diverse micro-climates of the company’s vineyards.

He was widely acknowledged as one of Australia’s foremost winemaking innovators. He was the first vigneron to pre-drain white grape juice to retain the delicate grape flavours in white wines; the first to use refrigeration to control wine fermentation temperatures; and the first, in 1962, to produce a Noble Rot Riesling using botrytis-affected riesling grapes from the Milawa estate.

His efforts were acknowledged in 1989, when his contribution to the wine industry was recognised with the Queen’s Birthday honours list seeing him awarded the Membership of the Order of Australia.

The new wine will sell for $90 and to Brown Brothers club members for $81.
www.brownbrothers.com.au