So you want to own your own wine estate in Australia? Take your pick.

It is an old joke that to make a small fortune in the wine industry you simply need to start with a big fortune and watch your money gradually disappear.

But the dream of owning a wine estate looms large with several larger estates on the market right now; as well as many smaller operations, including a couple in Tasmania.

Kevin Sobels and his wife Margaret recently announced they are selling their Hunter Valley winery, as they look towards retiring. 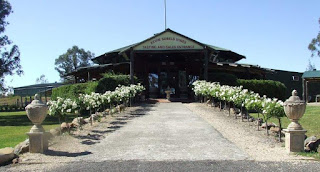 Sobels is a fifth generation descendant of German immigrant winemaker, Carl August Sobels and the family name has been connected to Australian winemaking since the 1840s, beginning in South Australia’s Barossa and Clare Valley.

The current 22-hectare property on Halls Road, Pokolbin (above), was started in the early 1990s and Sobels was installed as the 2014 Hunter Valley Living Legend of Wine, joining other Hunter notables as Brian and Fay McGuigan, Bruce Tyrrell and Don McWilliam.

Also on the market in the Hunter is the Windrim family's highly-rated biodynamic produder Krinklewood; on 57-hectates at Broke Fordwich.

The package includes a colonial style homestead with Provençal garden, tennis court and pool. There is also a manager’s cottage and temporary workers’ accommodation plus additional buildings, sheds, an orchard and olive grove.

One of the most respected boutique names names of the Barossa, Burge Family Wines, is also up for sale. 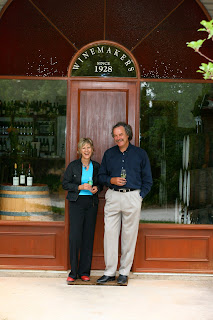 Rick Burge and his wife Bronnie (above) have decided to place their business on the market after he discovered a cancer diagnosis had metastisized to some vertebrae, a rib and a lymph gland near a lung.

"I need to focus on my future health, and Bronnie's future, so in the end, the decision was pretty straightforward - in fact, it was finalised lying in a hospital bed, watching the first Ashes Test after a hip-replacement operation," Burge said.

Burge Family Winemakers has 10 hectares of vines at Lyndoch and a successful export operation.