I've been lucky enough to enjoy river cruises and ocean cruises and much prefer to travel by river than sea.
I've never managed, however, to travel on a luxury barge through a wine region - which sounds to me like heaven on earth. 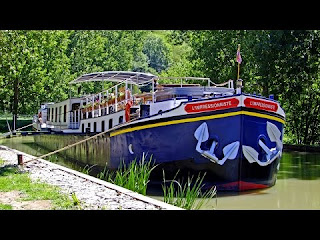 This musing was prompted by a press release from hotel barge cruising specialist European Waterways, announcing the completion of a $500,000 upgrade and refurbishing program across the company's fleet as it prepares to launch its 2018 season.

The upgrades addressed every aspect of the company's hotel barges, from the operation of the vessels themselves, to the dining, entertainment and sleeping areas, as well as the off-shore transportation of its guests, who are treated to daily guided excursions.
The company's latest upgrades include a complete redesign of the saloon for the 12-passenger L'Impressionniste hotel barge, which cruises Southern Burgundy. The hotel barge also received a new staircase, bar area, banquettes, and an oval dining table to help create more space and seating.
The eight-passenger L'Art de Vivre, which cruises Northern Burgundy, was upgraded with new bathrooms, while the Anjodi, an eight-passenger vessel on the Canal du Midi, was fitted with a new hardwood sundeck to complement a new saloon last year. Deck furniture has also been upgraded across many of the vessels.
This all set me dreaming of a leisurely week or two on the waterways of France, coffees and wines at waterside auberges and visits to some of the great cellars of Burgundy.
I can't recommend this company, but I do like the concept.
“It's the small details that make the difference between a good vacation and a great one,” said Waterways Europe managing director Derek Banks. “Once we have the engineering work completed, we are free to focus upon the exclusive, personalized service that our guests adore."
European Waterways' luxury hotel barges in Scotland, which cruise Loch Ness and the Great Glen between Inverness and Fort William on the Caledonian Canal, have been spruced up for the new season.
Founded nearly 40 years ago, the company owns, operates and markets a private fleet of luxury hotel barges with cruises in France, Italy, Scotland, Ireland, England, Germany, Belgium, Holland and Luxembourg. For more information visit
www.europeanwaterways.com.