Chateau Tanunda now even more of a family wine business

Château Tanunda is one of the leading wine producers in the Barossa Valley - established 1890 and now producing around 130,000 cases a year, much of it exported.
South African-born John Geber purchased the business 18 years ago and has increased sales from 50,000 cases over that time with a major focus on sales in Europe. 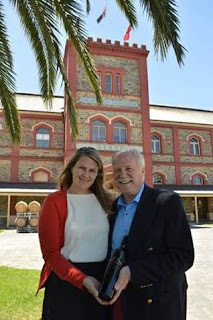 Geber this week announced the appointment of his daughter Michelle Geber to the position of general manager of Château Tanunda and related businesses, effective immediately.
It is a huge role, with Château Tanunda is an icon and Australia’s largest and oldest château.
"After looking high and low in a long recruitment process we found that the best candidate was within our own organisation," Geber said.
"The appointment of this position of great responsibility is impressive for Michelle at 32 years old, and it was not taken lightly.
"She has an extensive background in marketing and operations over the last eight years and was responsible for launching Château Tanunda’s brand internationally during a lengthy stint in the United States from 2009."
Geber says he has taken the position as executive chairman and will continue to dedicate his time to markets in the US and Europe.
Former long-term general manager Matt McCulloch has moved on to Langmeil Wines as CEO, while Matt Fitz-Gerald has joined Château Tanunda as global sales manager.
For details visit www.chateautanunda.com.