Travelling to and from Singapore just became a lot easier for Tasmanians.

Tasmania Premier and Tourism Minister Will Hodgman has lauched a new interline arrangement between budget airline Scoot and Virgin Australia, which will extend to all Virgin Australia flights into Hobart and Launceston. 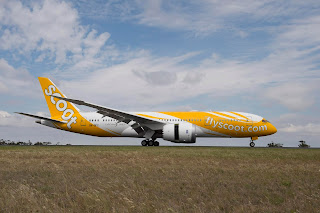 Scoot, the low-cost, medium-haul arm of the Singapore Airlines Group, operates the world’s first all 787 Dreamliner fleet to 18 destinations in eight countries/regions, including non-stop services from Singapore to Sydney, Gold Coast, Perth and Melbourne.

Through its partnership with Virgin Australia, Scoot will now be able to connect its Singapore-Melbourne service to Virgin Australia services operating between Melbourne, Hobart and Launceston.

The extension of Scoot’s interline partnership with Virgin Australia acknowledges Tasmania’s growing popularity amongst Asian visitors, and provides a great opportunity to attract more visitors from Singapore to the state for leisure, education and business.

Scoot Chief Executive Officer Campbell Wilson said: “Since Scoot commenced flights between Singapore and Melbourne last November, the response has been amazing. Our fantastic value airfares, plentiful choices and service with Scootitude have clearly proved a hit, so we’re delighted to making them even more accessible to Tasmanians and overseas visitors though the extension of our partnership with Virgin Australia.”

The Tasmanian Government’s Access 2020 Plan also shows that total air capacity will need to increase by 700,000 seats over the next five years or around 140,000 extra seats a year to achieve a 1.5 million visitor target.