When I was in Japan recently there were two words that just about everyone I met understood: Tetsuya Wakuda, the Japanese chef who hit the big time in Australia. 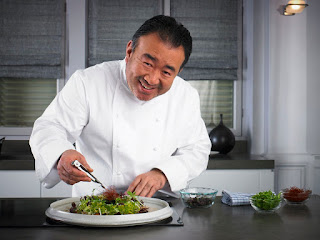 In Sydney, he's a culinary icon, a survivor for over a quarter of a century in one of the most competitive restaurant markets in the world.

In Singapore, he is the relative newcomer whose tiny eatery keeps garnering award after award.
And in Tasmania, he is just Tets, the gourmet ambassador who can't stay away.
The story of superstar chef Tetsuya Wakuda is a remarkable one by any measure; the tale of a young migrant from Japan who became recognised as one of the best chefs on the globe.
His Sydney restaurant, known simply as Tetsuya's, has been a regular in world top 100 restaurant lists since soon after it opened in 1989.
Waku Ghin, his Singapore outpost at the glitzy Marina Bay Sands resort, is ranked among the top 10 restaurants in Asia and a staff of 32 has catered for just 30 diners each night since it opened in 2010.
Two years ago, he earned the unprecedented honour of being named by the Japanese government as the first overseas-based chef to be recognised as a Master of Cuisine.
The late Charlie Trotter, the legendary American chef, described him as “one of an elite group of international chefs who have influenced other chefs through their personal styles and unique approaches to food”. 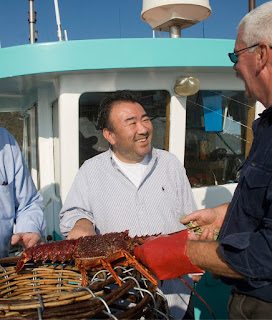 These are quite extraordinary achievements for someone who arrived in Australia at the age of 22 with very limited English language skills and sought work as a kitchen hand in a country where he expected to see kangaroos and koalas.
Along the way this quietly-spoken, humble man has devised a culinary philosophy centering on pure, clean fusion flavours that has been much copied but rarely bettered. Think dishes like scampi tail with scampi oil and chicken liver parfait (Sydney's up-market surf and turf), or marinated botan shrimp with sea urchin and Oscietra caviar at Waku Ghin, where a 10-course degustation menu is served at two sittings each night.
"I made up quite a few things along the way, and luckily for me, people like the way they tasted," Testsuya admits.
When he was presented with a Diner's Club Lifetime Achievement award – Asia earlier this year, he described his two restaurant businesses as “something that I believe in, and something that I love to do. But it is actually not my talent, but … everybody together, so this award is for the team.
“This kind of award is usually given to someone who has put in many years and is ready to retire. But I am not ready to retire yet.”
His humble attitude has made him one of the few superstar chefs about whom no one in the sometimes bitchy industry has a bad word to say – and he also freely admits discovering ideas every time he eats out, which is often.
“You have to have a passion for eating first – and from that comes a passion for cooking,” he says.
Born in Hamamatsu in Shizuoka prefecture, he arrived in Australia in 1982 with a small suitcase and big dreams.
He found work as a kitchen hand and then working for Tony Bilson, the chef superstar of his day, at Kinselas. It was here that he learned the classic French techniques that would help him create his own culinary style.
After several short stints at other eateries and a spell as part owner of a small restaurant called Ultimo's, where he cooked Asian-French fusion dishes and his star began to rise.
In 1989 he opened Tetsuya's in a small terraced house in the inner city suburb of Rozelle, and booking were soon hard to come by and waiting lists the norm.
A move to larger, classier premises in the city followed – along with international recognition.
Back home, his success was being noted and in 2006, he was named as the first Sake Ambassador outside of Japan. 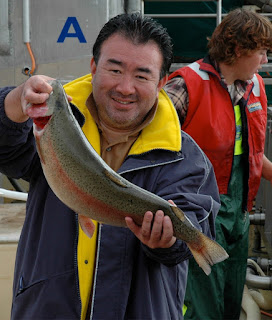 Since 2003 he has been the international food and beverage ambassador for Tasmania, a state he visits regularly and for which he has great affection.
A couple of years ago he had a “wooden fishing boat” built from local timbers, which he uses on his frequent trips to the island state. He treated hundreds of locals in Franklin, where the $800,000 motor cruiser Belle was built, to a slap-up breakfast to celebrate the launch.
In November, he was the star attraction at Effervescence, the annual celebration of Tasmania sparkling wine, at which he will cooked on the opening night.
In addition to his ambassadorial role, he has supported many small producers on the island; and his signature dish is a confit of Petuna ocean trout from Tasmania.
A fiercely private man with a broken marriage behind him, he says his staff are his family.
"To be honest, I think it's amazing that other people find time to be a father, a chef and a restaurateur,” he told me a few years ago. I may not have family here but I have people I can call family – some very dear friends - so I am very fortunate.
"Like most chefs I only ever wanted to cook my own food, in my own way and I am thankful that people continue to enjoy that.”
As for the future, he has considered opening a small Japanese-style tavern in Tasmania when he retires.

I caught up with him at Effervescence and asked how those plans were progressing.

"I'm looking," he said with an enigmatic smile. Tasmanians can only keep their fingers crossed.

# This is an edited version of a story that first appeared in Crown Lounge magazine
Posted by Winsor Dobbin at 18:28