Are a lot of airport security measures a waste of time?

We've all seen it happen time after time. Someone is stopped at the airport security checkpoint and has a tiny pair of nail clippers removed from their hand baggage.

Or maybe a pair of knitting needles intended to help fill several hours of flying time are deemed too sharp; taken away never to be seen again. 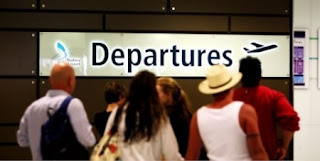 The security measures brought in after 9/11 were, in many cases a knee-jerk reaction with absolutely no basis in fact, or safety. It would make far more sense, for example, for everyone to undergo an explosives check before boarding.

With which could you do more damage? A pair of nail clippers or a magnum of Champagne? A super weapon and very sharp once broken. And what threat does a bottle of water pose on an international flight, other than to airport profits?

Robin Darroch, a training captain for a large Australian regional airline, was reported in the Sydney Moring Herald as telling a recent inquiry that many aviation security regulations "tend towards the wasteful and pointlessly obstructive" and distract security staff from identifying genuine threats.

He asked why pocket knives, screwdrivers, metal cutlery, and small scissors were prohibited from flights when they were "considerably less threatening than makeshift weapons someone could make by breaking a laptop computer screen, or even by sharpening a credit card"?

He said some regulations should potentially be repealed.

All the security measures over the past 15 years were not necessarily brought in to make people safe, but to make them feel safe. There is a very real difference.

Darroch questioned why he, as a pilot, was sometimes screened for weapons and other objects before entering his aircraft, despite having access to a "sizeable axe" on the flight deck used for emergency escapes.

It is also blatantly obvious that a heavy walking stick is a potentially dangerous weapon and that many brooches worn by old ladies are sharper and potentially more dangerous than a Swiss Army knife. Yet they are allowed on board with no questions asked.

There is no logic. And the reality is that there is a lot of money to be made from selling booze at airports; so anyone can carry a potentially menacing magnum of Bollinger on board.

Making money is apparently far more important than passenger safety. Time for a look at the rules maybe?