Wet. Wet. Wet. A Thai festival that it is best to avoid.

Songkran, one of the major festivals in Thailand, is being heavily promoted this year by the Tourism Authority of Thailand. Unwisely, in my opinion. 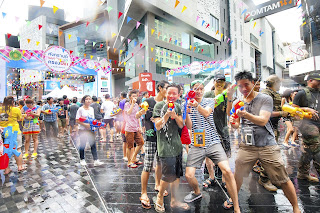 For those not familiar with Songkran, which runs through to April 20, "it is a time when families celebrate with centuries-old traditions, returning to their family homes for three to five days of making merit and water splashing ceremonies, which invokes sins being washed away with scented water."
In fact, you are more likely to be soaked with filthy canal water by over-enthusiastic water-pistol wielders, or proud owners of super-soaker machines, every time you leave your hotel.
There is no choice in the matter. You'll get sprayed enthusiastically whether you like it or not. Which quickly becomes very tiresome. 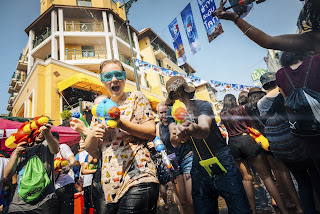 Yuthasak Supasorn, a TAT Governor, said: “The main Songkran activity is pouring scented water on sacred Buddha images of local temples in a ritual called Song Nam Phra."
From April 12-16, the official dates, TAT expects tourism spending from foreign and Thai travellers to amount to 19.8 billion Baht, up 18% on the same period last year.
My advice: visit beautiful Thailand any time of the year except this festival.
Posted by Winsor Dobbin at 18:22