Visitors to Venice over the May Day long weekend will find themselves segregated from locals as the Italian city bids to cope with a growing influx of cruise ships and Airbnb guests. 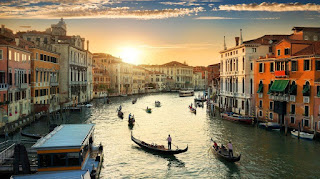 The Daily Telegraph and other media have reported that Venice authorities are to employ unprecedented crowd control measures to separate tourists from locals during the busy bank holiday weekend ahead.Tourists heading for landmarks such as St Mark's Square and the Rialto Bridge will be diverted to tourist-only routes, away from locals who have for years complained that their day-to-day lives are made a misery by the invasion of visitors.

Certain areas will only be accessible to residents and regular visitors of the city (those with a Venezia Unica card).

Tourist numbers are expected to peak between on Tuesday, May 1, which is a public holiday in Italy and many other countries. Mayor Luigi Brugnaro said he has signed a decree which contains "urgent measures to guarantee public safety, security and livability in the historic city of Venice".
"The tourist flows heading to Rialto or San Marco will be directed on alternative routes," the city council said.The measure is partly in response to this year's Easter long weekend, when Venice was inundated with even more tourists than usual and visitors had to wait for up to an hour to board the city's vaporetto water buses.

Responsible Travel founder and CEO Justin Francis said the news of "over tourism" was sad.

"How has this beautiful city ended up in this position?" he asked. "For decades tourism has been threatening Venice."They've found it impossible, or been unwilling, to confront the growth of tourists visiting from cruise ships or as Airbnb guests."The mentality has been one of 'growth at all costs', to the detriment of local people and the very soul and essence of the city.

"It seems it's now official that Venice has been reduced to a theme park, with Disney crowd control enforced.

"Tourism is about bringing people together, locals and visitors, and when done properly, both parties should reap the benefits. It should never be about segregation. In my view, it's tragic that it has come to this."

Venice has a population of 50,000 but receives 30 million tourists a year.