Brian Freeman: a vigneron who enjoys a challenge

For a start, his vineyards are in the Hilltops region outside the town of Young in rural New South Wales. “A lot of people have never heard of he Hilltops,” he says with a smile.

Secondly his flagship Secco wine is made from rondinella and corvina grapes, virtually unknown outside of Valpolicella, classically used to make Amarone wines in the Veneto, and the only mature plantings in Australia.

He also likes to dry a portion of the grapes to concentrate flavours, as per the Italian ripasso method, to produce reds of intensity, structure and elegance. 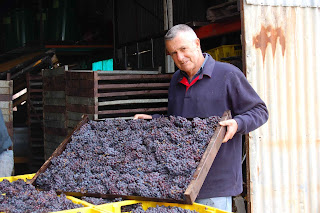 Freeman, the former professor of wine science at Charles Sturt University, has an eclectic range.

The Secco is the star but there is is also an outstanding creamy and textural 2014 Prosecco ($25), the first release, the pale and savoury 2013 Rondo rosé ($22), also made from rondinella grapes, and a delicious botrytised sweet wine called Dolcino ($25, 375ml), made from viognier grapes.

The Freeman portfolio also includes a cabernet sauvignon and a shiraz (both varieties thrive in the cool Hilltops), as well as a tempranillo (all around $25) and an intriguing, dry, savoury white wine labelled Fortuna Pinot Gris Plus, a blend of gris, riesling, chardonnay, sauvignon blanc and Italian variety aleatico. The style is inspired by the field blends of Italy's Alto Adige region.

Freeman, whose motto is “dare to be different”, dries some of his grapes for Secco in an old prune dehydrator, eliminating any risk of unwanted botrytis.

Overall, he has 103 hectares of vines but sells most of his fruit, much of it to Hunter Valley wineries for blending. He first planted rondinella and corvina in 1998 and released his first Secco in 2002.

Freeman describes himself as having “a small winery and a large vineyard” and the Hilltops is a region with immense potential sitting at 500-600 metres above sea level with very cool nights.

He is snapping up more vineyards such is his belief in the district's future, although he only currently only uses 5 per cent of the fruit for his own label.

A very different style; but extremely rewarding for those willing to take the plunge into the unknown. Dark and inky with 14.5 per cent alcohol; it is no shrinking violet but this Amarone-inspired blend – from fruit harvested in May – is more about structure than power and is medium-bodied and flavoursome with savoury sous bois notes along with the dark fruit, soft oak and relaxed tannins. A wine that blossoms with food, so pair it with a game ragu and pasta.