You’ve done Bali, visited Bangkok and Phuket, seen Hanoi and Ho Chi Minh City. What’s next on your Asian agenda? Phnom Penh, the capital of Cambodia, is exotic, offers something for everyone – and can be enjoyed on a tight budget.
Once known as the “Pearl of Asia”, it was considered one of the loveliest French-built cities in Indochina. Founded in 1434, the city is notable for its historical architecture - and its grand boulevards are dotted with French colonial buildings. 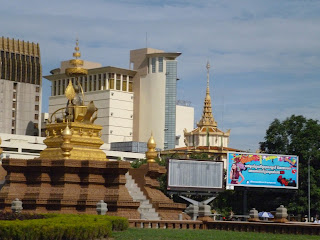 Built where the Tonle Sap and Mekong rivers converge, Phnom Penh is home to around 2.2 million people trying to put the recent horrors of the Pol Pot regime behind them.
Determinedly Asian, with a definite French accent, Phnom Penh has long been popular with backpackers, but is now appealing to more well-heeled travellers who also visit Angkor Wat and Siem Riep.
New shopping malls and five-star hotels are being built in a frenzy of construction but walk just a few blocks from downtown and you can step back half a century to pot-holed lanes and outmoded goods. Visit  the Central Market teeming with stalls selling gold and silver jewellery, antique coins, clothing, clocks, flowers, food, fabrics and shoes. Some patience is required. Tourists are offered no respite from crazy drivers and motorcyclists, street beggars and touts – but while Phnom Penh may be rough and ready around the edges, it does offer an authentic experience.
Tuk tuks and cyclos are the preferred forms of transport – any tourist renting a car in Phnom Penh needs their head read. A good local guide can be a worthwhile investment for travellers of a more nervous disposition.
Lovers of history are well catered for – and thankfully there is a lot more to Khmer history than the recent Khmer Rouge atrocities. The National Museum is the best place to learn about the culture of the local people. A red sandstone building of colonial Khmer design, it is home to a collection of sculptures, ceramics, textiles, glass, pottery and bronzes dating back as far as the 12th century.

A visit to the Killing Fields is nonetheless de rigueur. Choeung Ek, a 35-minute drive out of Phnom Penh, is the hamlet where Pol Pot’s murderous Khmer Rouge slaughtered thousands of Cambodians and buried them in mass shallow graves during 1975-79. Many of them were bludgeoned to death. It is estimated up to 20,000 people died here. Skulls of many of the victims are stored in a macabre memorial tower (below). 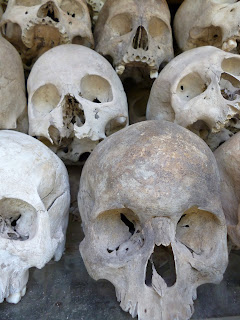 Equally chilling is Toul Sleng, on the fringes of downtown Phnom Penh, a former high school that became known as S21, a centre of torture and interrogation of political prisoners during Pol Pot’s four-year reign. It is now a genocide museum showing in graphic detail the beatings and humiliations dealt to over 17,000 who passed through the doors. Some history books say that only seven people survived, and one of them, Chum Mey, can be found in the grounds selling a book written about his horrific experiences.

Far more pleasant excursions include the Royal Palace, which dates back to the late 1860s and is noteworthy for its classic Khmer architecture, elaborate gilding, soaring spires and golden temple nagas (carvings of mythical reptilian creatures). The palace is an oasis of peace in the centre of a frenetic city and its lush French-style gardens house life-size sculptures of Khmer warriors and Buddhas. Also check out Wat Phnom (Temple Hill), the capital’s tallest temple and a gathering place during the annual festival of the dead. The temple was built in 1373.

Also don’t miss joining the locals on the Sisowath Quay Riverwalk, which runs alongside the west bank of the Tonle Sap. Lined with palm trees, the stretch from 104 Street to 178 Street is popular at dawn and dusk with locals who practice tai chi and a variety of martial arts. The lively strip is full of street vendors, hotels, restaurants, bars, cafes, pharmacies selling anything you want without a prescription, massage joints, beauty spas and internet cafes.

The local cuisine is less spicy than Thai with local kampot pepper used more than chillies, which tend to appear as a side dish. Rice noodle soups, stir-fries and curries are common and you’ll occasionally find frog’s legs, reminiscent of French colonial days. Sit at local roadside cafes and pay just a couple of dollars or splurge at the Foreign Correspondents Club (FCC) a bar and restaurant complex over several levels that is hugely popular with local expats. Head for the second-floor terrace of this renovated colonial building and enjoy colonial ambience and western-style food. For a taste of home try the Aussie XL Cafe and Bar. 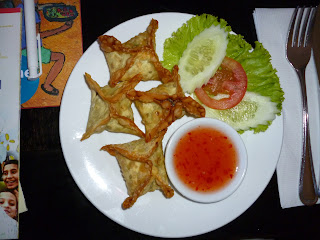 Many people in Cambodia are desperately poor, so holidaymakers can do some good during their visit. Pour un Sourire d’Enfant (For the smile of Child) is a French charity working with poor and at-risk kids and  helps more than 6000 children with food, education, healthcare and vocational training. Visitors are welcome to visit and see what the charity is achieving. An on-site shop at their Stung Meanchey campus sells scarves, clothing and art works created by the children and their parents and PSE today employs over 450 Cambodian adults as teachers, trainers, social workers and nurses. www.pse.asso.fr

Friends is a charity-run eatery that trains Phnom Penh street kids in restaurant skills (kitchen, front of house, waiting etc) so they can get jobs in the hospitality industry. The service is charming and your dollars go a long way to improving someone’s life. Profits from the restaurant help 800 kids each day. www.friends-restaurant.org

Budget airline AirAsia flies daily from Sydney to Kuala Lumpur with links to Phnom Penh and also has flights from Bangkok. In-flight entertainment tablets are available for hire and seats can be selected when booking. www.airasia.com.

Phnom Penh can also be reached via Mekong River cruises from Vietnam. A speed boat from Chau Doc in the Mekong Delta takes around four hours.

Footsteps in Asia is an Australian-owned and operated boutique tour company that specialises in tailor-made holidays in South-East Asia, ranging from backpacking and home stays to five-star resorts. It offers a range of destinations in Cambodia and several regional tours that include Phnom Penh.  Experienced local guides are available in each destination. For details call 1300 664 331 or see www.footstepsinasia.com.

The Ohana Phnom Penh Palace Hotel is centrally situated with multilingual staff able to help with a range of suggestions of places to visit. It also has a ground-floor swimming pool with jacuzzi, a gym, sauna and massage facilities. There are just 75 rooms and wi-fi is free. Rooms from around $75 per double. www.ohanahotelpp.com.