A trip back to a place I'd never seen: St John's, Newfoundland

I remember sitting on my father's knee as he told stories of the fishermen who braved mile-high seas to work the Grand Banks for cod, of the bitterly cold winters in St John's and of the logging workers of remote Corner Brook.

My late father was born in , which didn't become part of until 1949, but left home to fight in World War II, leaving a large extended family behind. After surviving the war, a rare feat for a tail gunner, he lived in and before returning, not to , but .

It is a long standing joke among Newfoundlanders that many descendants of the islanders, like myself, "have never been home". So a few years back I decided it was time to visit an alien culture, meet cousins I've never known and to check out places that had just been dots on a map to me.

The capital of  (as is evident on the Foxtel TV crime series Republic of Doyle) is small, and remote, which is part of its undeniable charm. 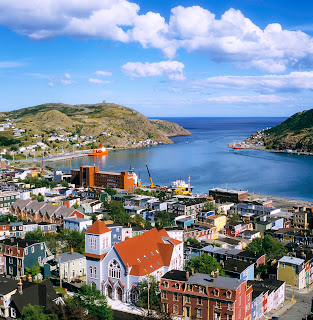 We stayed in the grand hotel that has variously been known as the Newfoundland Hotel, the Fairmont and new the Sheraton, which offers expansive views of a harbour that once housed a massive fishing fleet.

My cousins later told me that my grandmother had worked in the Newfoundland Hotel, and my father had a stint there as a bus boy when he was a teenager. Our stay was no doubt more comfortable than theirs.
is known as “The Rock”. Windswept , just outside , is the most easterly point of North America – just a four-hour flight from ’s .

The locals, a uniformly cheerful bunch, speak with a bizarre accent that is half Canadian, half Irish – I remember my father speaking the same way. Then it seemed natural, now it seems strange.

St John’s, a lively port with dramatic lookouts and a surfeit of pubs featuring folk music, is the obvious base for any visit; but it’s worth getting out of town for a day or two; maybe to visit the millions of colourful puffins in the Witless Bay reserve, the fjords and mountains of the Gros Morne National Park, or for a day trip out of the fishing village of Bay Bulls to search for whales – more humpback whales visit the waters off Newfoundland than anywhere else.

The countryside can be rugged; bleak even in places, but this is a raw land, largely undisturbed by the 21st century. The weather can be wild, even in September. At we feared we might be picked up by the mighty wind and speared right into the .

In winter, which can mean as late as June, massive icebergs float close to the coastline; moose roam free in the countryside. It’s wild – and wonderful. The air is invigorating.

The fact the local delicacies include salted cod’s tongues, scrunchions (deep-fried pork fat) and seal flipper pie (no I didn’t try it), illustrate this is a place apart. There’s not much market for salted cod tongues in cosmopolitan or urbane .

The local berries (partridgeberries and bakeapples) are, however, superb, as are dishes like snow crab cakes, fillet of caribou and panko-crusted salmon at the outstanding downtown restaurant, Bianca’s.

In , the oldest settlement in , you’ll be captivated by the multi-coloured clapboard row houses, or terraces, that dot the hillside. Picturesque Quidi Vidi village, a small fishing settlement on the outskirts of town, looks as if it has been plopped down from the 19th century. It is home to a tiny brewery (based in an old fish processing plant) that makes superb ales.

I visited St Bonaventure’s College, where my father used to be regularly hit with the strap by “Christian” Brothers – it is now under new management.

It’s strange to meet three cousins (Michael, Mary Win and Cathy) that I’ve never met before. Cathy, who is a TV star in , flies in from . , to meet the Newfie who’s never been home. Despite our different upbringings, different cultures, different accents, there’s an immediate bond. I feel like I’m home, despite being a stranger in a strange land.

I visit The Rooms, the relatively new, state-of-the-art and imposing museum/art gallery/archives that dominates the skyline over , and discover an installation created by another cousin, Andy, with whom we’d already caught up in . Everyone in knows Andy, who is an actor, comedian, director and artist of considerable note.

In , I learn, the five degrees of separation can usually be reduced to two degrees. Everyone knows everyone – and they’ve got the time to stop and talk to them on the streets. It’s that laid-back. 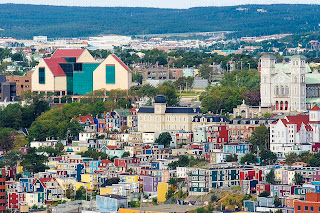 Tourist attractions include  on Signal Hill, built in 1897 to mark the 400th anniversary of by Italian explorer John Cabot. The tower is on top of Signal Hill, from where Marconi received the first trans-Atlantic wireless signal in 1901.

At blustery but beautiful , where there is a gallery of paintings of ’s many lighthouses; the curator bewilderingly insisted I take several beautiful prints with me. Such acts of kindness are still considered normal here.

Even for someone for whom science is a mystery akin to the Da Vinci Code, a visit to the Johnson Geo Centre is fascinating – reminiscent in its popular approach to the Natural History Museum in , it explains the geology of the world through the of and neighbouring . One exhibit tells the story of the Titanic’s sinking off . Words don’t do it justice. I could have spent all day here.

Although we didn’t see any whales in early September, they had been sighted a week earlier. We went out on a catamaran with Gatherall’s on a whale watching cruise out of Bay Bulls. The waters were deep and churning, the whales elusive.

Far more productive was a visit to The Fluvarium, where you can study the lives of underwater creatures, including trout, at close quarters. You get a cross-sectional view of the brook that flows through the magnificent park in which the facility is set.

St John’s is good for drinking; there’s a wide range of atmospheric pubs centred on George Street, shopping for local curios on Water Street and for Irish-tinged folk music (hear it in pubs like Erin’s, Bridie Molloy’s and O’Reilly’s).

On a day trip out of town, you can visit the tiny heritage village of Brigus, where cars stop to allow families of ducks to cross the road, waterfront Cupids, the settlement of Harbour Grace where you’ll find the “best fish and chips in the bay”, Cape St Mary’s Ecological Reserve, home to dozens of varieties of sea birds, and the sleepy fishing village of Petty Harbour, where a fisherman building a boat still had time for a chat.
’s like that. It’s a special place that I need to get back to soon. In summer.

Air offers daily, direct, services from to via with connections to over 70 destinations within , including . There are daily flights to from , , , , and . For fare information, contact your travel agent or see www.aircanada.com.