Looking for the freshest, most innovative sushi in Tasmania, perhaps Australia?

Head out of Hobart into the Huon Valley, set course for the working class timber town of Geeveston and then seek out a tiny shopfront that holds less than 20 people.

You've found Masaaki's Sushi, open only two days a week (Friday and Saturday) but a place of pilgrimage for lovers of sushi, sashimi and other Japanese delicacies. 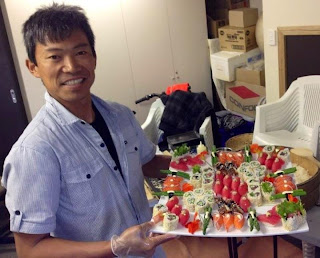 His artistry has been featured on Gourmet Farmer and other television shows, but he has rebuffed efforts to entice him to the city, having grown up in rural Japan and feeling comfortable in Geeveston, a place where most of the residents had never tried sushi prior to his arrival..

Koyama grows his own herbs and vegetables - and utliises fresh Shima wasabi from the north of the state. His stall at the Hobart Farm Gate Market every Sunday invariably sells out. His sushi is a work of art, and tastes even better than it looks. And the prices are ludicrously low for the quality. 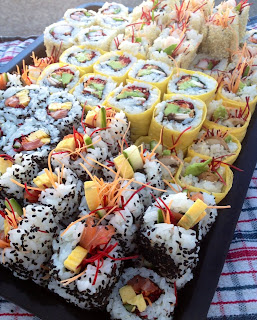 The fresh miso soup in the restaurant is outstanding, as are dishes like thinly sliced duck breast which appear only when the produce is available. Book, or arrive early, as Masaaki sometimes closes up when he runs out of food.