Why the Hilton Adelaide was a huge disappointment

Oh dear, oh dear. You can learn a lot about a hotel when you stay for five nights - and what I learnt about the Hilton Adelaide was far from impressive.

And this used to be a terrific hotel; a temple of gastronomy with great staff and a terrific location. 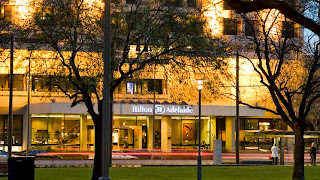 I learnt, for a start, that hotel personnel are not all being trained properly.

When I asked the doorman where the business centre was, he directed me to the first floor - where I found a computer that was unmanned and locked. I followed the instructions on the desk to ring the operator and was told someone was on the way.

Ten minutes later a surly fellow arrived and told me I was in the wrong place. I should have been on the ground floor. He had no answer when I asked why the doorman and the telephone operator had been unable to relay that information to me.

When I did finally get to the business centre it contained sluggish machines and no printer - so I had to find an internet cafe to print out my boarding pass in any case.

If this was just one example of a hotel that seems to have lost its way then it would have been fair enough - but similar issues were endemic. It was surprising to find such lethargy in a hotel brand that has a global reputation for excellence.

The lifts were a point in case. One was out of action almost from the moment we arrived and at one stage all the public lifts failed simultaneously. Sheepish staff had to direct guests to scruffy service elevators until the problem was fixed.

And as the hotel appeared to be full there were long waits even when the lifts were in operation.

Then there was the room functionality - where you actually had to get out of bed to reach the switch to turn the bedside light off. Who designs things like that?

And the servicing of the room. The two face cloths I used in my first 24 hours never reappeared for the remainder of my stay. The bathroom amenities were not replaced even when they had clearly been used.

After three days I wanted my towels replaced so I put them on the bathroom floor as instructed by an in-room leaflet. When I returned that night all had just been hung up again, toothpaste stains and all. I'm as green as the next guy but if I want my towels changed surely that shouldn't be an issue.

Also, if you come down later than 9.30am all the newspapers that are stacked in front of the concierge desk will have gone. I wasn't offered one delivered to the room.

Throw in the wifi: $27 for a 24-hour period; it was clunky and slow. And this is a city which has announced free wifi in the city core; which will ultimately eliminate such blatant gouging.

The bathrooms are cramped, too, but the beds are comfortable and there are windows that open to let in fresh air - a rare bonus.

The Hilton used to be home to restaurants such as Cheong Liew's iconic The Grange Restaurant (from 1995 to last year) and to creatives including Simon Bryant, who was executive chef for here for 10 years.

Today the hotel's only food outlet is The Basserie, a cafe-cum-restaurant where a request by one of my colleagues for freshly made bacon at breakfast was rejected. From haute cuisine to $25 set lunches in 12 months.

Fortunately I was in Adelaide for the excellent Savour wine event as a guest of the Pernod-Ricard group. If I'd been spending my own money I'd have been seriously unimpressed. One company executive did talk to the general manager about the unsatisfactory service but received no real explanation.

That said, service in the Lobby Lounge and the Collins Bar was brisk and friendly, but the gouging continues with a 1.5% surcharge of any payments with a credit card - apparently a national Hilton policy. And $34 for valet parking.

There were plenty of porters in evidence during the day, but none to be seen later, when many guests check in.

There's further bad news in that Adelaide is very much a building a site at the moment. The once very attractive Queen Victoria Square, which the Hilton overlooks, has been ripped apart and is now only worth avoiding, while down the road Rundle Mall is also a 24-hour hive of demolition and construction activity.

No doubt this is progress. But the Hilton itself is also, in my humble opinion, in need of a serious makeover.

UPDATE: Here is the reply I received from the Hilton, which I do not believe addresses any of my criticisms. You be the judge.

Thank you for taking the time to pass on your feedback regarding your recent stay with us.

I appreciate your positive comments regarding the service you received in the Lobby Lounge and the Collins Bar however I am sorry that you found certain aspects of your stay disappointing.

At Hilton Adelaide we are committed to exceeding the expectations of our guests, I therefore apologise for the disappointment experienced on this occasion.

I acknowledge the need for some training requirements which will be discussed with the Department Managers concerned and steps will be taken to improve these areas of the operation.

Mr Dobbin, once again I do apologise that we were unable to meet your expectations and for any resulting inconvenience on this occasion.

I hope you will allow me the opportunity of welcoming you back again in the future.