There can be few places in the world where you’d be invited to help yourself to all the facilities of a waterfront restaurant – including the kitchen – and to then walk away after making a small, and voluntary, donation.

But King Island, off the north-west coast of Tasmania, midway to Victoria, marches to a very different beat to the mainland.

The Boathouse (below) has a barbecue, outdoor tables and chairs and several tables inside a cottage with a jaunty nautical theme. Anyone is welcome to use the facilities, including plates, glasses and cutlery, as long as they clean up after themselves. 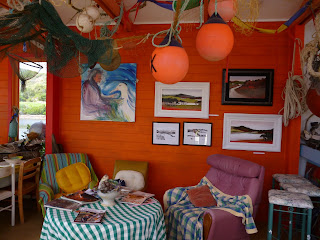 The Boathouse was rebuilt a couple of years ago after the original burned down – and is maintained by local artist Caroline Kininmonth, who also runs a gallery on the island.

And cooking ingredients are not hard to find: this windswept 64-kilometre by 27-kilometre island is foodie heaven – and an environmental jewel. The population of King Island is around 1500 and you can travel from the northern tip to the southern extremities in around 90 minutes – but it is one of the world’s great gourmet destinations, famous for its shellfish, cheese, beef and bottled rain water that’s served in some of the greatest restaurants around the globe.

Situated off the north-west coast of Tasmania and accessible by air from Melbourne, Launceston and Burnie/Wynyard, King Island has some of the cleanest air in the world thanks to the Roaring Forties winds in Bass Strait. Shellfish, particularly abalone, flourish on its wild and tempestuous coastline - one of the world’s last remaining unspoilt marine environments. 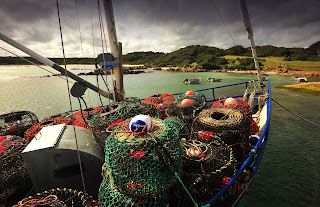 Only around 5000 visitors a year make it to King Island, ensuring it remains almost untouched by pollution.

Some of the finest crayfish in the world, for instance, are caught in the waters off King Island. The small fishing fleet is based at Currie (right), the island’s biggest town (population 500 odd) and visitors are welcome to see them being unloaded when the boats come in. Within 24 hours the crays have been flown halfway across the world and are on sale at Tokyo’s Tsukiji market.

Pick one up to cook yourself, or, if you are on a budget, pop into the local Currie bakery and enjoy a crayfish pie for lunch. You’ll pay around $12 depending on the season.

There are an estimated 100,000 head of cattle, which provide not only the famous King Island beef, but also milk for King Island Dairy, one of Australia’s best-known cheese brands.

“If you have a pristine environment like this, with fresh air and clean water, you cannot help but get quality milk – the key ingredient of great cheeses,” says Ueli Berger, the Swiss technical director of King Island Dairy (below), which produces a wide range of gourmet cheeses, creams and yoghurts. 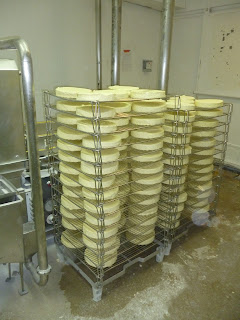 The southernmost point of King Island is called Stokes Point and the northernmost Cape Wickham – both of which are names for two of the many gourmet cheeses produced on the island, along with Surprise Bay Cheddar, Roaring Forties Blue and many others.

The rain water, branded as King Island Cloud Juice, is regarded as among the cleanest on the planet and has been listed on the lists of globally renowned restaurants including el Bulli in Spain and hotels like Claridge’s and various Mandarin Orientals.

But you’ll also find that very same water being served at the Grassy Club, one of the island’s pubs, and in its Kings Cuisine restaurant, which specialises in local steaks and char-grilled local octopus.

Chef Stephen Russell at the Grassy Club uses local produce like the grass-fed beef, which can be purchased at Russell’s Butchery in Currie and is regarded among the best in the Australia. Also try the local kangaroo apples (berry-like fruits which are not apples or eaten by kangaroos), and King Island bush pepper.

Even for those not obsessed by food, King Island has plenty to offer. Tour guide Ian Johnson, who runs King Island Holiday Village and 4WD tours, says: “King Island may be small, but it is also one of the most diverse destinations in Australia.”

The coastline is dotted with over 100 shipwrecks, involving the loss of over 2,000 lives and many King Islanders are descendants of shipwreck survivors. On the Cataraqui, which foundered in 1845, 400 people died – Australia’s worst peacetime maritime disaster.

Cape Wickham, heritage-listed and built in 1861, is the tallest lighthouse in the southern hemisphere – and the location of a proposed luxury golf resort, one of two in the planning stage on the island – the other is just outside Currie. In the meantime, there is the nine-hole King Island Golf Club links course adjacent to the Southern Ocean that is rated among the best in the country.

Cape Wickham is a great spot for a picnic, as are Penny’s Lagoon, a beautiful and often deserted freshwater lake, and Martha Lavinia beach, a favourite with some of the world’s top surfers because of its remarkable breaks. Here, your footprints may well be the only ones on the sand.

Seal Rocks has magnificent views of the malevolent churning waters below, and you’ll find penguin and mutton bird colonies here, with baby penguins sometimes sheltering beneath the wooden walking track.

Adjacent to Currie lighthouse is a fascinating local history and maritime museum with many shipwreck relics, while it is also fascinating to watch the kelp harvesters in action and view their drying racks.

Also don’t miss the calcified forest to the south of the island, where a short walk will take you to the moonscape of the remains of a 7000-year-old forest that have been preserved by lime-laden sand. It is an eerie scene. 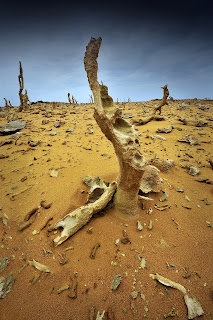 Take a 4WD tour to get onto rarely visited beaches for the perfect get-away-from-it-all picnic; do a tasting of the entire cheese range at King Island Dairy (open six days a week but closed on Saturdays) or take a twilight trip to check out little penguins in their natural habitat.

Portside Links has holiday units and bed and breakfast accommodation and is also home to a local arts and crafts gallery, while fishermen will relish throwing in a line and catching abundant kingfish, salmon, gummy shark and mullet.

The pleasures here are simple ones.

Getting there: Sharp Airlines flies to King Island from Melbourne, Launceston and Burnie/Wynyard. 1300 556 694, www.sharpairlines.com.au, while Rex Airlines has regular flights from Melbourne. 13 17 13. www.rex.com.au.

Staying there: King Island Holiday Village features a range of self-catering and motel style accommodation and is able to arrange bespoke tours in purpose-built 4WD all-terrain vehicles. The King Island Cooking School will be launched later this year. (03) 6461 1177. www.kingislandholidayvillage.com.au.