The key area in which Tasmania is sadly second rate 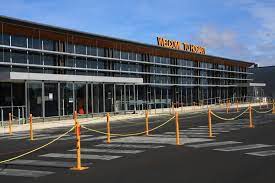 It is time, as comedian Shaun Micallef would say, for some "plain speakin".

Tasmania is gobsmackingly gorgeous, a destination that draws in visitors from around the world for its natural beauty, great food and wine and delightful accommodation.

Unfortunately, however, while Tasmania has a "world class" tourism industry, it has a main airport that is embarrassingly second rate.

Hobart Airport has spent much of the past decade as a building site as work has been done on its terminal, its car parks and its access roads.

But it remains a bit of a joke because it has never had the foresight to install air bridges (also known as jet bridges).

In one of the coldest cities in Australia, passengers have to walk to and from their planes across the tarmac. Often in biting winds and sleet. When it rains in Hobart passengers get soaking wet boarding or disembarking.

This week, Hobart Airport unveiled a 20-year draft (I said draft, not daft) "masterplan" to expand the airport's capacity - with construction due to start over the next two to four years.

Only one problem. While $60 million has been budgeted to expand the airport's runway, there is no cash to build to a few air bridges, which apparently cost around $1 million each.

This in a state where they want to spend upwards of $750 million for a new stadium that would host around a dozen AFL games each year.

The rationale, according to airport chief executive Norris Carter, is that air bridges would be "too expensive" and would add to the cost of air tickets in the long run.

I call bulldust. Four air bridges would cost $4 million. Throw in a couple more million for a small second-storey extension, if needed, and some escalators.

I would have thought $6 million was a fair price to pay for a proper facility for the gateway for most tourists coming in and out of the state. 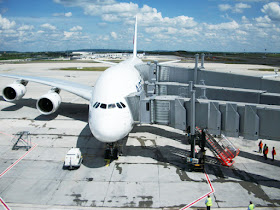 Yes, those very people who waited up to 90 minutes in the freezing cold when the airport couldn't get its procedures right during Covid testing.

If $6 million extra is beyond the state's "majority Liberal-National Government" then maybe some initiative could be shown.

How about a one-off lottery with a million-dollar first prize with the aim of raising the funds needed? It worked for the Sydney Opera House.

Or how about finding a sponsor willing to tip in a major sum in exchange for having their brand name plastered all over the air bridges? Not even considered, apparently.

This for an airport that will handle an estimated 5.5 million passengers a year in 25 years time.

Currently, Hobart handles around 2.8 million passengers a year. A $1 per passenger levy over three years would pay for the air bridges and building extension. Too hard, apparently.

Norris Carter and Tourism Industry Council of Tasmania CEO Luke Martin are in lockstep that "an air bridge would lead to steeper fares, as well as flight delays".

Yep. Those pesky air bridges at Heathrow, Atlanta, Sydney and other major airports around the world are such a failure. Even Pyongyang Airport in North Korea has air bridges.

Carter says the the plans to upgrade the airport will cost in "the hundreds of millions of dollars". But no one has the nous to include a few "expensive" air bridges.

It would be funny if it wasn't so sad and lacking in foresight.