Take public transport anywhere in the country for €9 a month 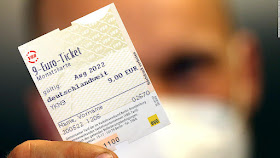 Until the end of this month visitors to Germany can pay a one-off €9 ($13) fee and travel anywhere in the country by public transport.

And Germany’s €9 a month rail passes have proved so successful the government is under pressure to extend the scheme it introduced in June but finishes at the end of August.

The pass entitles the user to travel on buses, U-Bahns, S-Bahns, trams and local and regional trains for one calendar month but does not include high--speed long-distance trains like the IC or ICE.

The current pass has led to a drop in congestion on roads in 23 out of 26 cities examined as part of a preliminary analysis by traffic data specialist Tomtom for the German Press Agency last month.

Around 21 million of the €9 tickets were sold in June alone, Association of German Transport Companies (VDV) figures showed. That’s on top of the roughly 10 million subscribers who automatically received the discounted ticket.